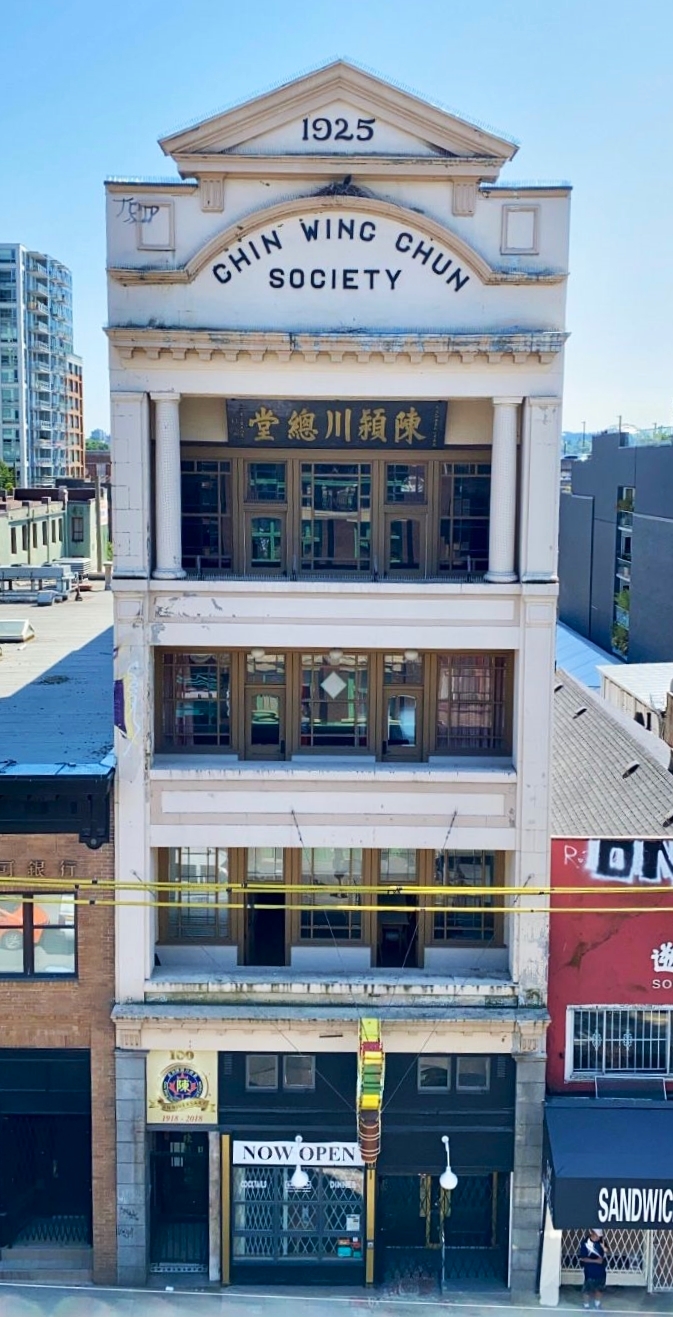 The Chin Wing Chun Society Building is a narrow, four-storey brick and stucco building in the classical revival style, which houses Tong meeting rooms over a street-level restaurant. It is an example of how smaller clans coming together to build one headquarters.

The Chin Wing Chun Society Building has value for being representative of buildings erected and occupied by major Tongs during a period of rapid growth in Chinatown, and for being an excellent example of the Chinatown style of architecture.

The Chin Wing Chun Society Building is a particularly good example of the mature Chinatown style and this is an important aspect of its heritage value. Four storeys high (with a ‘cheater’ mezzanine added after completion) and free of interior columns, it has retail space (in this case a restaurant) on the ground floor, offices above, and a meeting room on the top floor. The street-facing windows on the upper floors are all recessed behind balconies flush with the stucco finish. The pedimented parapet features the name of the Tong and the date of construction (1925). Like most buildings of this kind, the architect, R.A. McKenzie, was European-Canadian.

The building accommodated the Chin Wing Chun Society, the association that provided support and protection to people with the surname ‘Chin’, ‘Chan’, or ‘Chen’, whose ancestral birthplace was Wing Chun Village in Hunan Province. Organizational life flourished in Chinatown during the early 1920s; the number of active Tongs expanded and they assumed an important role as property owners along Pender Street. The reasons for expansion include the overall increase in Chinatown’s population, fuelled by immigration from China and migration from other centres in British Columbia, an increased interest in Chinese politics within the immigrant community, and heightened discrimination from the white community.

Heritage value is also found in the significant contributions several members of the Society made to the community. An example is Chin Chuck Lin (Harry Chin), who came to Vancouver from Guangdong as a teenager in 1920, began work as a vegetable peddler, went on to flourish as a produce and floral wholesaler, and donated generously to Chinese cultural and charitable organizations through his Harry Lin Chin Foundation.

Chinese Canadian Historical Society (2005). Historic Study of the Society Buildings in Chinatown. Report prepared for the City of Vancouver. Available from City of Vancouver. http://vancouver.ca/files/cov/historic-study-of-the-society-buildings-in-chinatown.pdf

A The heritage category defines the historical significance of a building.