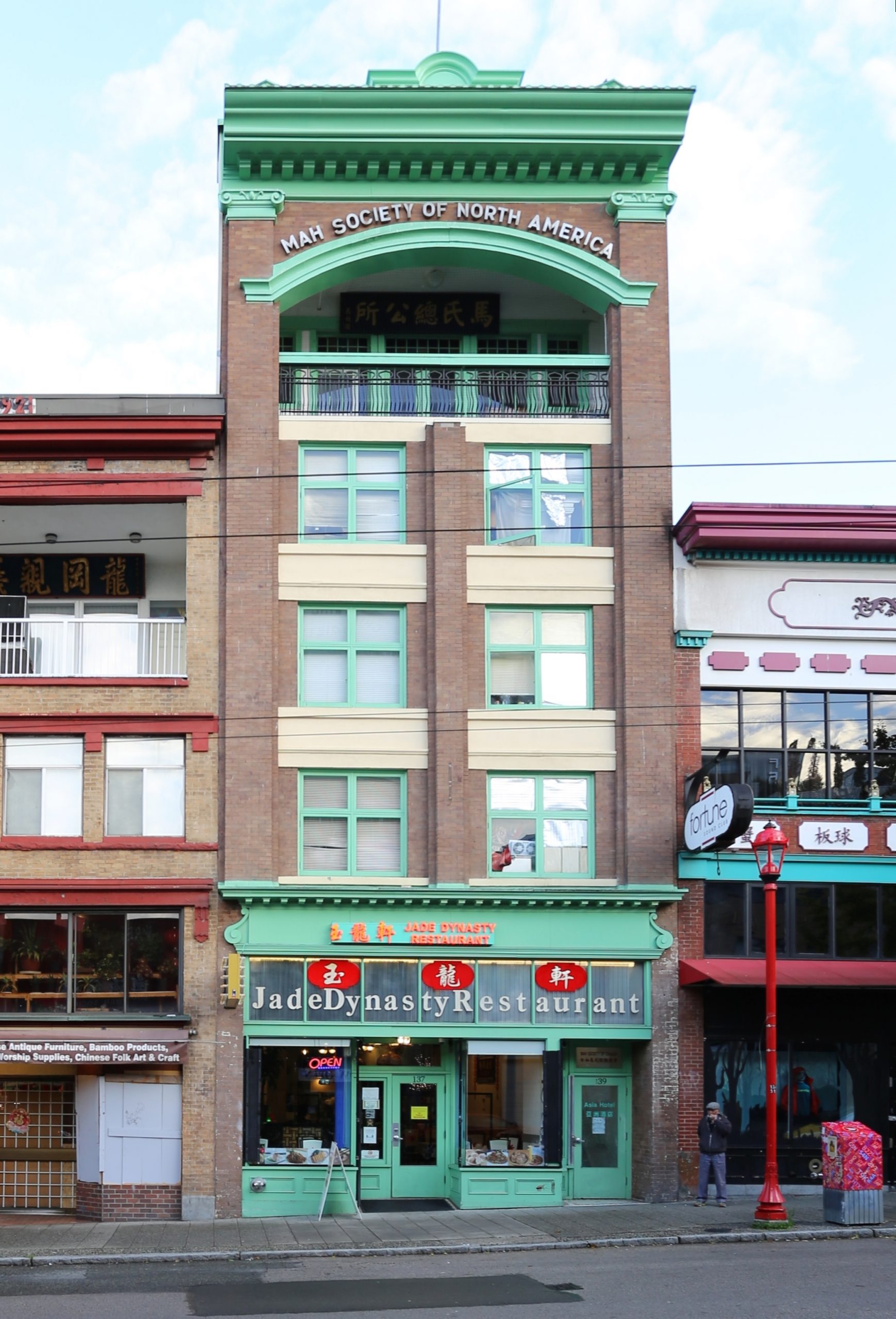 The Mah Society was informally established in Vancouver in 1919 and purchased its building two years thereafter. In 2017 the building was completely rehabilitated and stabilized. It is the first fully restored Chinese Society Heritage Building in Vancouver's Chinatown.

The Mah Society was informally established in Vancouver in 1919 and purchased its building two years after. Constructed in 1913, the building was designed by Henry Barton Watson. Watson’s design was of particular note for being the earliest identified example of the use of Chinese architectural motifs (now sadly lost) in the form a pagoda-roofed cornice, and Chinese temple-shaped finials. Furthermore, the building housed the Kwong Fong grocery at street level with the Minglee Rooms above. It illustrates how society buildings fulfilled the needs of new immigrants by providing a cultural hub and housing.

As it housed both the North American headquarters of the Mah Society as well as the local branch, an additional floor to accommodate a meeting hall was added in 1921 by architect E.J. Boughen. Its recessed balcony is the only reminder of an elaborate traditional Chinese design. The additional story for the Mah Gim Do Hung Society (later the Mah Society of North America) is

representative of the trend in early twentieth-century Chinatown for building tong meeting rooms atop existing buildings, thereby imbuing them with status through height. At the time, this additional story made the Mah Society building the tallest on the block.

received support from the Chinatown Society Buildings Planning Grant Program to prepare rehabilitation plans. In 2014, it received the Chinese Society Matching Grants for repairs to the building exterior envelope, including deficient roofing, masonry, windows, and siding, as well as refurbishment of deteriorating heritage façade.

In 2017, the Mah Society of Canada building has been completely rehabilitated and stabilized. Work included the rehabilitation of the Pender Street façade, a full roof replacement, building systems upgrade, and renovated interior finishes. It is the first fully restored Chinese Society Heritage Building in Vancouver Chinatown. Long-term restaurant tenant, The Jade Dynasty Restaurant was reinstated at the street level along with the fully renovated 3-stories of 36 SRA units above. The top-level remains the national headquarters and formal meeting hall, which is used for meetings and formal gathering. This formal space is designed with semi-recessed columns and capitals on both walls and mouldings on the ceiling, doors, and windows. It is furnished with formal Chinese chairs and tables, and paintings and photographs of early founding members.

C The heritage category defines the historical significance of a building.